The Female Voice of Iran is an independently produced feature documentary about female singers inside Iran and their deep wish: "I want my voice to be heard".

Since 1979 solo singing in public is forbidden for women in Iran. For several years, starting in 2015, the Iranian ethnomusicologist Yalda Yazdani and the German filmmaker and artistic director of Zeitgenössische Oper Berlin Andreas Rochholl have been travelling through Iran to meet and film female singers in all parts of this multi-ethnic, diverse country. During this time they created a network between those women, other musicians and their friends. They further realised a highly acclaimed, independently organised music festival twice in Berlin to present those voices produced by Zeitgenössische Oper Berlin. The festival had hugely positive responses from audience, artists and press. In 2019 the producer and filmmaker Sebastian Leitner joined the team to start work on a very different feature documentary. 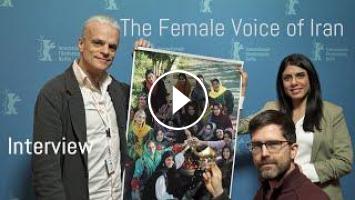